If we catch the 11.32 No87 bus from Pool Meadow we get to Knowle at 12.21 and go straight to the RED LION, where we can wait and see if anyone joins us until 12.45. If anyone drives there be aware that although the car park may be free, you still have to get a ticket and display it to prove what time you arrived, otherwise you are likely to get a parking fine!

Then we set off walking along the road back towards Balsall Common and Coventry until the bridge over the canal at Knowle Wharf. From there we follow the towpath northwards as far as bridge 7A, where a path takes us back to Knowle. At the High Street we find the WILSON ARMS, an ancient inn now a Toby Carvery. We can check out the beer and maybe have a half before crossing the road to KNOWLE TRADITIONAL SWEET SHOP. After a little nostalgia there we move on to the ALE ROOMS, just a couple of doors down. This has seven changing beers and is the only pub in Knowle in the 2022 Good Beer Guide.

After this the next place is the GRESWOLD ARMS, a hotel with a public bar. After checking this out we pass the chocolate shop and turn right into a side street where we find the VAULTS. This was in the beer guide but I guess has been supplanted by the Ale Rooms

We next pass the artisan bakers, which is expensive. Why does employing the word ‘artisan’ always imply high prices? Eric Lyons the butcher is a much more reasonable alternative, and they do quiches for the veggies amongst us.

Next we pass the Red Lion, where we started. Then we come to the final call, Lokis wine merchant, which has a sampling room at the back, much like Beer Gonzo. I suspect the prices will be similar to Beer Gonzo’s too, but it looks interesting so I shall give it a go. Opposite here is the chippy if anyone is feeling hungry. Then we catch the bus back. They leave at 41 minutes past the hour until 6.41. 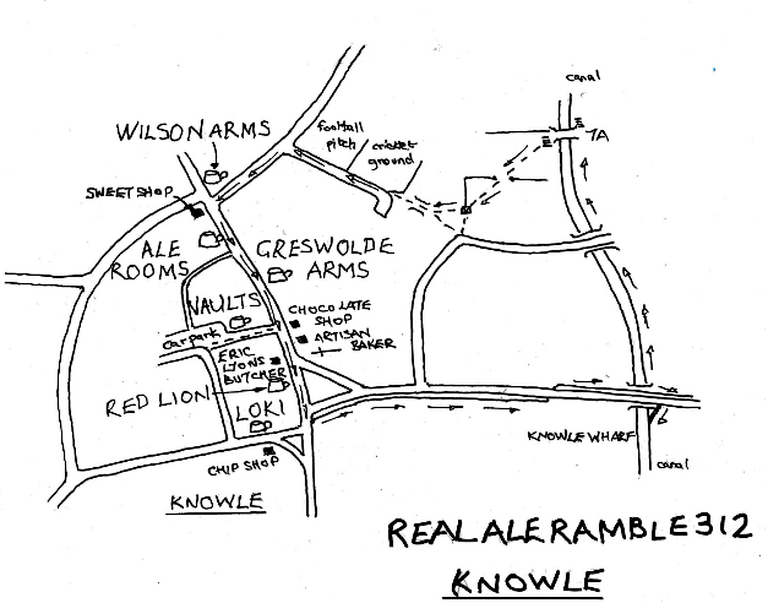 I had intended to use the old railway at Long Itchington as a possible short cut on the walk along the banks of the River Itchen six months ago. However, at that time it was being dug up and converted into an extension of the Offchurch Greenway. I recently learnt that this new greenway had opened. Well, it hasn’t. About three quarters is open. The final approach into Long Itchington is still being worked on and at the other end, as it nears Offchurch, there is a deep cutting which is also incomplete.

The whole greenway will be so long that I decided to split it i SOLIHULL A8 BUS/LEAMINGTON/TAMWORTH/SUTTON COLDFIELDnto two walks, so that the walk we are doing now is a similar distance to the River Leam walk.

We meet at the HARVESTER in Long Itchington at 12noon. At 12.30 we walk along Bascote Lane as far as the railway bridge. Here we join the ‘Blue Lias Greenway’, so called because the railway was the ‘Blue Lias Mineral Line’. The greenway is brand new and there are still trackside signs to be seen. It takes us through pleasant Warwickshire scenery, until we reach an overbridge near Snowford. Here there is a bit of a scramble to get down to the road; I am sure they will install a flight of steps eventually.

To return to Long Itchington we follow the embankment of the greenway for half a mile, then the bank of the River Itchen through woodland. Passing White farm on the left and the cricket pitch on the right we come to Long Itchington again. A path takes us through the middle of the village, ending in The Limes Croft, where we return to the HARVESTER.

There is a whole network of old railways in East Warwickshire that are to be converted to greenways: this is the first example, so in future years it should make for more good walking. 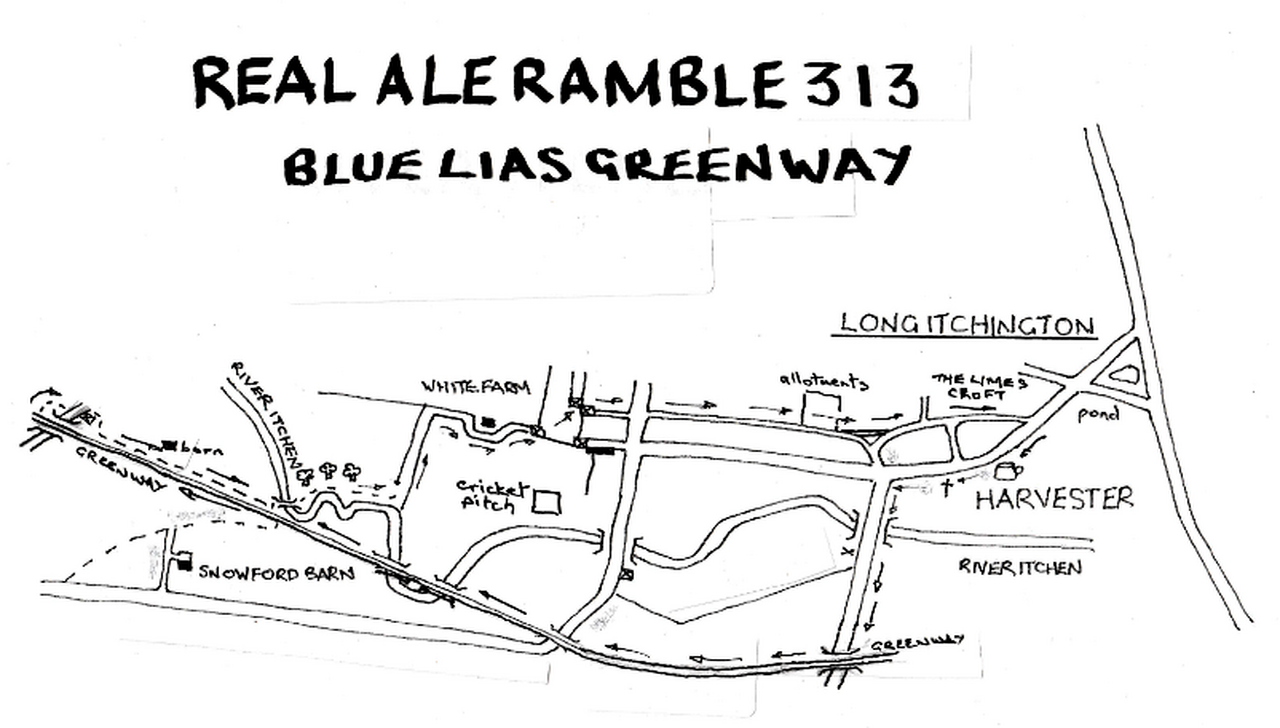 Meets for these walk are always 12 noon for a 12.30 start. Copies of the walks are available at Beer Gonzo, Earlsdon.

These walks all start at 12 noon. Copies of these walks can be obtained from Beer Gonzo in Earlsdon, or for more details contact moc.liamg@ttekculfg>

Now that there are three food outlets in the Memorial Park I thought it would be a good idea to have a walk around them, before the schools go back and possibly one of the outlets closes. This is a walk that is so short that it is possible for anyone to do as it is less than a mile long!

We meet at the main cafe near the tennis courts at 12 noon. It is now called ‘The Bistro’, although in reality it is just the park cafe. We can have a bite to eat there before setting off at 12.30-ish for the long walk to the far pavilion. I still remember this as the old changing rooms, but today it is the home of an ice cream parlour.

After a break here we embark on the slightly less exhausting walk to the next ice cream parlour, pretentiously called ‘The Park Gelato’. Here we can devour our second ice cream of the day, no doubt welcome after so much walking.

From ‘Park Gelato’ we walk past the tennis courts to the ‘Bistro’ again for wine and cakes.

Next month I am thinking of having a slightly longer walk. 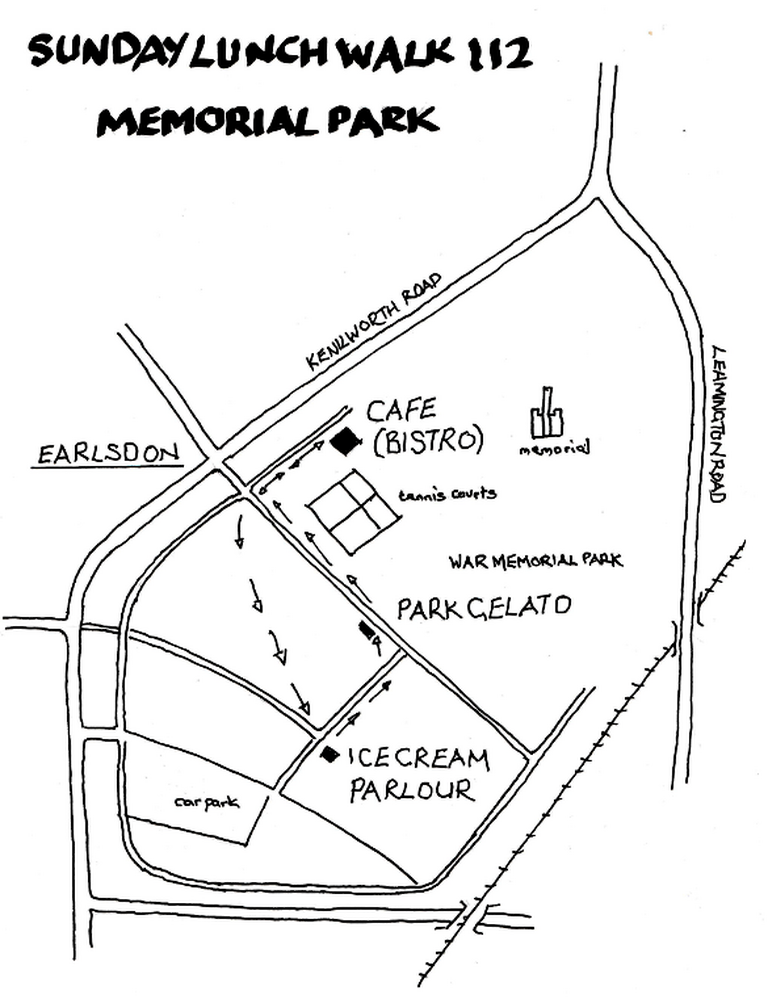 Meet at the GENERATOR BAR in the Telegraph Hotel

Meet at the RAINBOW in Allesley

These walks all start at 12 noon. Copies of these walks can be obtained from Beer Gonzo in Earlsdon, or for more details contact moc.liamg@ttekculfg